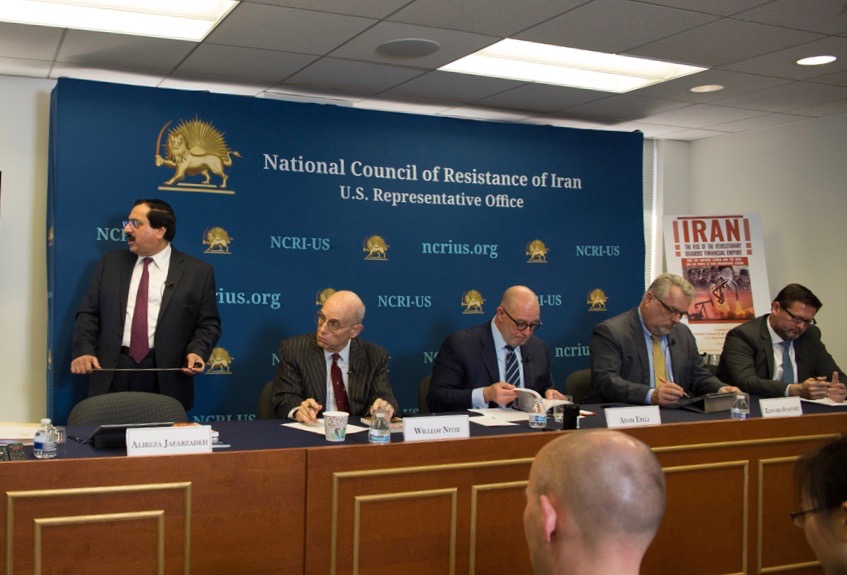 The Trump administration is considering asking the State Department to designate the Iranian Revolutionary Guard Corps as a terrorist organization, according to former U.S. diplomats and intelligence officers.

With a force 125,000 strong, the IRGC would be the largest terrorist organization on the State Department list. Many prominent members of Iran’s government count in this number, among them former president Mahmoud Ahmadinejad, who remains involved in Iranian politics and is a potential candidate in Iran’s presidential elections scheduled for later this year.

To designate an entity as a terrorist organization, the U.S. State Department must determine that the organization in question poses a threat to the national security of the United States and the lives of American nationals.

The move would require U.S. government to freeze financial assets of members.

A designation as a terrorist organization would complicate efforts by Iran to establish economic ties with the outside world, following the signing of an agreement on Iran’s nuclear program in 2015 under President Obama.

Former U.S diplomats and intelligence officials spoke in favor of listing the Iranian Revolutionary Guards Corps at a recent event in Washington D.C. hosted by the National Council of Resistance of Iran (NCRI).

“[The IRGC] has harmed Americans and American national interest - it qualifies to be a terrorist organization,” said former U.S. state department official Edward Stafford. “I know from my time in the Middle East that many Americans killed by IRGC supported Iraqi Shia militias.”

Former U.S Army intelligence officer Michael Pregent argued that American’s policy has allowed Iran to flout international agreements. “Iran is already in violation of Security Council Resolutions and hasn’t paid the price because there is no enforcement,” he said. “If the IRGC is labeled a terrorist organization, the regime will likely treat it as a paper they can ignore because the past administration was often hesitant in applying sanctions.”

Pregent warned, however, that, “Designation doesn’t mean anything if it isn’t followed up with the freezing of assets.”

Its arsenal and support for U.S. designated terrorist groups aside, the Iranian Revolutionary Guards Corps has amassed a vast financial empire within Iran, according to a spokesperson of the NCRI.

Currently, only part of that force is directly targeted by U.S. sanctions. The so-called Al-Quds Force or “Jerusalem” Force - which provides support to Iranian proxies in the Middle East and elsewhere - was labeled a terrorist organization in 2007, the first time a military unit belonging to a nation-state rather than a non-state actor received the label.

As with other states in the region, such as Egypt, Iran’s military maintains a vast economic empire well beyond its formal national defense duties. The IRGC has benefitted greatly since 2005 when the government began privatizing government assets in ways that benefited those with close ties to the Guard. Jafarzadeh said this process has accelerated in recent years.

“One of Iran’s largest companies is the Khatam Al-Anbiya Construction Headquarters, which is perhaps the largest construction company in the Middle East. The IRGC dominated company grew out of the Iran-Iraq War,” said Jafarzadeh. The company was founded to utilize a large number of military engineers left unemployed by the war’s end.

Jafarzedh’s believes that as much as 50% of Iran’s GDP is now controlled by people with direct ties to Iran’s Supreme Leader Grand Ayatollah Ali Khamenei or the IRGC. In 2015, Reuters quoted an unnamed Western diplomat who claimed that IRCG alone controlled somewhere between $10 and $12 billion, roughly one-sixth of Iran’s GDP. IRGC companies are diversified, with interests ranging from oil to construction.

Sanctions against the IRCG would likely impact the proposed sale of Boeing aircraft to Iran. Entities with ties to the IRCG have invested heavily in Iranian airlines and also in its oil industry, another important economic asset.

Jafarzadeh said the bottom line is simple and clear: “If Western companies do business with Iran, they are doing business with the Supreme Leader and the IRGC.”